As many of you know, I’ve spent the last few months collecting the results of as many underworlds tournaments as I could find in order to get a good look at the state of the game.

All of the games took place after the Banned and Restricted list was updated for the second time shortly after the Mollog’s Mob and Godsworn Hunt release, up to the release of Ylthari’s Guardians and Thundrik’s Profiteers.

My only criteria for an event being included in this data was that it have at least 6 players and 3 rounds. I left out any wins from byes whenever possible, and counted draws against a faction’s win rate (since they are not wins).

During this time I collected data from 60 events, which consisted of 1384 matches between 769 players.

Below is some of the interesting data I was able to collect. You can see all of the raw data here.

The below pie chart shows how popular each faction was over all of the events in the quarter out of the 769 players.

Below you can see the overall win rates for each faction (wins/total games played).

The below chart shows the data another way:

Another stat I find interesting in addition to simple win rate is how likely a given faction is to progress through each round of a tournament undefeated. Winning your games at the beginning of an even is generally easier than winning them at the end, so this seems like useful information.

Below you can see what percent of players in each faction made it through the first, second, and third rounds of their events undefeated. 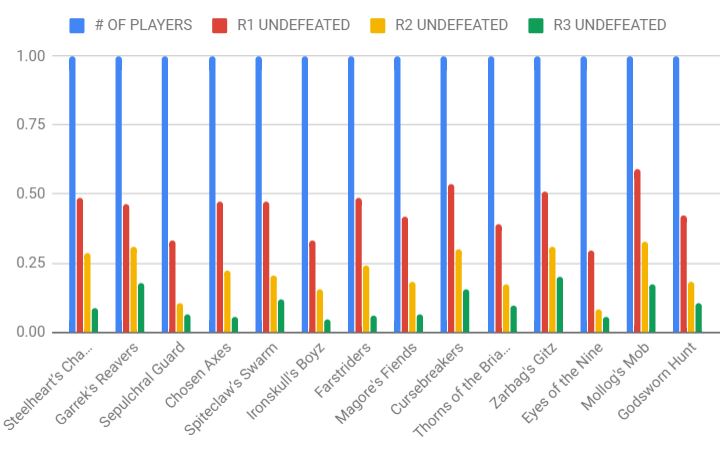 As you can see, although some factions such as Gitz have lower overall win rates across all of their games, a higher amount of those players tended to progress farther in the tournaments with them than with higher win rate factions like Cursebreakers and Mollog. Even Reavers, which tended to have low numbers overall, had a significant number of players go the distance compared to the other Warbands with the second highest 3rd round undefeated percentage.

To me, this shows that although some factions may be objectively powerful and likely easier to play, some other factions are able to well in events when piloted by the right player.

The purpose of tracking this data was to try and get a good look at the current state of the game, and I am happy with the number of games I was able to collect and track over the course of S2Q3.

I plan to continue tracking event data going forward, though I am currently waiting to see if there is a FAQ soon or not, as ideally I will reset the data when their is. If there is not a FAQ soon, I plan to retroactively collect the BCP data from events that took place after the release of the Guardians and Profiteers to the next update.

If you have an event you would like me to include in future data, let me know by messaging me on Facebook, discord, or here. All I need is the win/loss/draw/bye info for each player (WWLW, BWWL, LLBW, etc) and who ended up winning the event. Names are not needed, so Orks 1, Orks 2, etc, is fine.

I will automatically gather the results on Best Coast Pairings and UnderworldsDeckers as they are submitted, so don’t worry about those.

If there is anything else I should track going forward, let me know and and I will see if I can add it in for the next quarter.